​The Early History of Rugby at Virginia Tech - Pre 1968
Although the men’s rugby team at Virginia Tech was officially started in the fall of 1968, rugby was actually first played in Blacksburg 87 years earlier.  Students at the 20 year old Virginia Agricultural and Mechanical College (VAMC) had no organized sports at the time. Those wishing to play any kind of game simply found a level spot available and started one.

The very first organized game of rugby football was played in the fall of 1891 on an uneven wheat field behind Barracks No1 (Lane Hall), about where Shanks Hall stands today. The students liked it so much that they decided to form a team the following year.

Rugby had established itself in the United States through its colleges and universities. Rudimentary forms of a game date as far back as 1820; brutal mass games were played at several Ivy League schools. And shortly after William Webb Ellis ‘picked up the ball in his arms and ran with it’ in 1823, during a game of football at Rugby School in England, rugby caught on and became popular at the Ivy League schools. Rugby then started to spread to other schools, the length and breadth of the United States.

Unfortunately for rugby though, at this point during the 19th century, the United States was still trying to develop a new national culture, independent of its English colonial roots; the same way it had become politically independent the previous century. And the developing game of rugby was struggling to catch on with a new American version of the game quickly becoming more popular on campuses.

And so it was at VAMC. Although, it’s quite possible that the first recorded football game on 21st October 1892 against St. Albans of Radford would have looked more like rugby than football, it was football that took hold in Blacksburg and not rugby.

Although there is no written evidence, but it is quite possible that rugby could well have continued at VAMC after 1892, it was not a recognized sport on campus and went the same way rugby did up and down most of the east coast of the United States. In the early days of the football team, it was reported that, ‘many players would not attend training if they weren’t in the starting line-up’, so these players may have played the rougher, colonial version of the game as an unofficial team.
This picture was taken around 1900 and looks very much like a rugby team.
On the west coast though, rugby remained a popular sport, especially at universities. Crowds in access of 26,000 regularly attended games between the University of California and Stanford. And it was the west coast that provided the bulk of the 2 Olympic gold medals won by the United States in 1920 and 24.

But not until 1968, would rugby be played again in Blacksburg.
​ 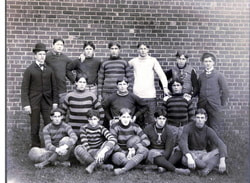 This picture was taken around 1900 and looks very much like a rugby team.

On the west coast though, rugby remained a popular sport, especially at universities. Crowds in access of 26,000 regularly attended games between the University of California and Stanford. And it was the west coast that provided the bulk of the 2 Olympic gold medals won by the United States in 1920 and 24.

But not until 1968, would rugby be played again in Blacksburg.

The Modern Era - 1968 Until Present Date
Virginia Tech Rugby was founded in 1968 by a group of young college students looking for a little bit of variety and excitement in their lives by trying to channel their excess energy into the sport of rugby. When rugby was re-born at Virginia Tech, it was a completely new experience for many of the first players who had never even seen or heard of the sport before coming to VT. Among these players were names like Steven Doyle, Dave Trivette, Dave Macomber, Wit Truit,Walt Seedlock, Bruce Bartek, Thomas Behrendt, Gregory Clayton, Jim Duesberry, Richard Drennon, Richard Harvey, Steven Johnson, James Ostheimer, Mike Newnam, Ralph Quesinberry, J.R. Trimble, and David Vollmer, all responsible for bringing us the game and traditions of Virginia Tech Rugby for years to come.

For 40 years, Virginia Tech Rugby has grown to become one of the nation’s top rugby programs. Several teams have achieved a national ranking among the top 16 teams and many players have been selected for the Collegiate All-American Team. With great alumni support, rugby at Virginia Tech will continue to be successful for years to come.